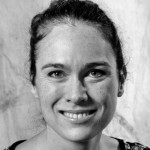 Associate Professor
Principal investigator
Obtained a MSc degree in Cognitive Psychology (2006) and Clinical Psychology (2007) from Leiden University in the Netherlands (with honors). In 2007 she started her PhD trajectory at Tilburg University, also in the Netherlands. Under the supervision of Prof. Beatrice de Gelder she investigated how context, gender and personality factors influence the perception of facial and bodily expressions of emotion. After her PhD (2011) she moved to Japan with a JSPS grant to study chimpanzee’s emotional behavior. Those nine months were the start of her comparative research line which, with financial support from KNAW and in cooperation with Primate Zoo Apenheul, continues until today. During her postdoctoral appointment in Amsterdam her research on emotion perception extended to social decision making and became more and more interdisciplinary, connecting sub disciplines within the field of psychology with primatology, behavioral biology and psychiatry and combining various research methods, ranging from psychophysiological measures to hormonal administration and observation studies. The NWO VENI and NWO Research Talent grants enabled her to set up the CoPAN lab at Leiden University, which has expanded quickly with help of the NWO VIDI, ERC Starting Grant and funding from the Templeton World Charity Organization.

My PhD focused on the perception of emotional body language and innovated the field of affective neuroscience that was characterized by an almost exclusive focus on facial expressions. I showed that the brain processes body movements similarly as facial expressions but also initiate clear action patterns. I argued that body language is evolutionary seen older than facial expressions and inspired by Darwin’s work on emotions and by contemporary primatologists, I experimentally tested this statement in a group of chimpanzees at the Kyoto University Primate Research Institute. I demonstrated that many of the facets constituting emotion processing are evolutionary ancient, and shared with chimpanzees and bonobos, our closest living relatives. For all social species, the capacity to express, recognize and share emotions enables individuals to navigate their social worlds and forms a core component of what it means to be socially competent and healthy.  However, many patients with mental disorders show impaired social skills including avoidance of eye contact, hyper-arousal, less emotional mimicry, and deficits in emotion recognition, and suffer from social isolation. I showed that patients with different mental disorders have similar emotion processing deficits but that specific symptomatic patterns in mental disorders may vary with the cultural background of an individual. This observation sparked my interest in expressions that are genuine, beyond control and automatic, and I started differentiating between emotional signals, those that are controllable and sometimes learned, and emotional cues, which are more automatic. In my NWO VENI project I focused on one particular emotional cue, the pupil. I showed that people mimic pupil size and that pupil mimicry, through interactions between subcortical areas and the Theory of Mind network, fosters decisions of trust. Together with my PhD student E. Prochazkova, I designed a ‘Neurocognitive Model of Emotional Contagion’, proposing a pathway for motor mimicry, and, for the first time in the literature, for autonomic mimicry. Recently, I started investigating facial mimicry and pupil mimicry during dyadic interactions in controlled settings in the lab with PhD student F. Behrens, but also beyond controlled settings, e.g., at Lowlands festival. This work has extend to a broad research program supported by an ERC Starting Grant that aims to understand what is being expressed when, what function that has, how it works from a mechanistic viewpoint, how that might have developed over the human life course and how it evolved. Mapping out deficits in patients with autism and social anxiety disorder help us understand how these phenomena work in healthy individuals (NWO VIDI). In sum, my research focuses on emotion processing, pupil-mimicry, their neurophysiological underpinnings and implications for social decision making in humans as well as in great apes. Intimate moments with Alpha-female Ai in the lab at