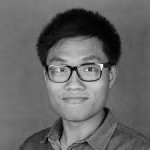 Postdoc
2020 – present
Jingzhi Tan received his B.A. in Life Sciences from Peking University and his Ph.D. in Evolutionary Anthropology from Duke University. He has since been a postdoctoral associate at Duke University, a primate research fellow at Zoo Atlanta and a postdoctoral scholar at University of California, San Diego. He uses a phylogenetic comparative approach to study the evolution of human nature. He is particularly interested in 1) the origin of both intergroup aggression and intergroup cooperation, 2) how complex cooperation is sustained out of self-interest, 3) how social cognition evolved in understudied species. Since 2007, he has been conducting non-invasive cognitive research with humans (children and adults), bonobos, chimpanzees, gorillas, orangutans, gibbons, langurs, lemurs, dogs and wolves. He has collaborated with zoos, sanctuaries and schools in Asia, America and Europe.

Jingzhi is working on the project ‘Evolutionary Insights into Social Intelligence’. In the project he will investigate the role of emotional expressions in social decisions in bonobo’s and humans.