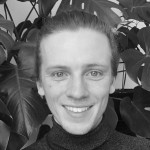 Research Assistant
(2018 - present)
Received his BSc degree in Biology and MSc degree in Environmental Biology at Utrecht University. He is currently working as a research assistant in the CoPAN group, focusing on perceptions of emotions in orangutans. He has ample experience in testing animals in experimental settings and conducting behavioural observations of primates, both in the wild and in captivity.

Ever since I started working as zookeeper at Apenheul Primate Park during my high school period, I became intrigued by the variety of the species-specific behaviours within the primate order. During the years that I worked with several primate species, I grew a scientific interest in their behaviour. Determined to achieve my goal of becoming a primatologist, I finished a bachelor in Biology and a master in Environmental Biology, with a specialisation in Behavioural Ecology, from Utrecht University in the Netherlands.

During my studies I worked on several topics regarding primatology. For my second internship (supervised by Dr. Mariska Kret and Evy van Berlo, I studied emotional attention biases and emotional contagion in orang-utans. Because of some, unfortunate, touchscreen breaking activities of the orangutans, the study on emotional attention bias was paused. After finishing my internship with the study on emotional contagion, I was still very motivated to finish the other research, which is how I became a research assistant for the CoPAN labgroup. Additionally, in 2017 I was fortunate to join Evy to study wild chimpanzees in Rwanda.