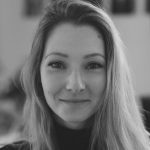 I have been fascinated by animals for as long as I can remember, and devoted myself to coming as close as I can to answer the question What It Is Like to be for them. My mission is to help move the dominant world view beyond anthropocentrism, and gain a better understanding of the minds of the non-human sentient beings with whom we share our planet.

I started my academic path with a bachelor in Psychology. I loved every bit of my study, but was also rather surprised to find how little attention was given to the cognition of non-human animals. Moreover, the studies that did had an anthropocentric twist to them: they researched animal’s brains and behaviour with the purpose to learn more about humans. I thought it was time for a change, so I set myself a goal: to devote as much coursework as possible to explore the psychology of our fellow primates. I wrote my bachelor thesis on empathy, sympathy and Theory of Mind, comparing the data from different primate taxa (monkeys and apes), which I later converted in a review article that would be published in the Animal Welfare Journal.

At this moment I had developed a true passion for primates, and I went on to pursue a master in Primate Conservation at the Oxford Brookes University. For my final project and thesis, I studied the ecology of the Germain’s Langur (Trachypithecus germaini) in Cambodia, which got published in the Asian Primates Journal, and simultaneously created and implemented an education program on primates and their conservation (click here to visit the project’s page), which I funded with three competitive grants,

After my graduation, I was very fortunate to receive a grant to work with the Himalayan Langur Project, to create an educational magazine and assist in research on the Endangered Chamba Sacred Langur (Semnopithecus ajax). For the years that followed, I worked in the creative industry as an artist and content creator, and founded an ethical clothing company and blog.

My passion for primates, research and exploring non-human minds has brought me back to academics. I currently partake as a PhD candidate in the interdisciplinary project “Visual Signs as Cognitive Tools: Phylogeny and Ontogeny”, where I study the evolutionary roots of mark-making in human- and non-human primates.

Brenda’s PhD research is funded by a grant from the Templeton foundation, awarded to Larissa Mendoza Straffon.