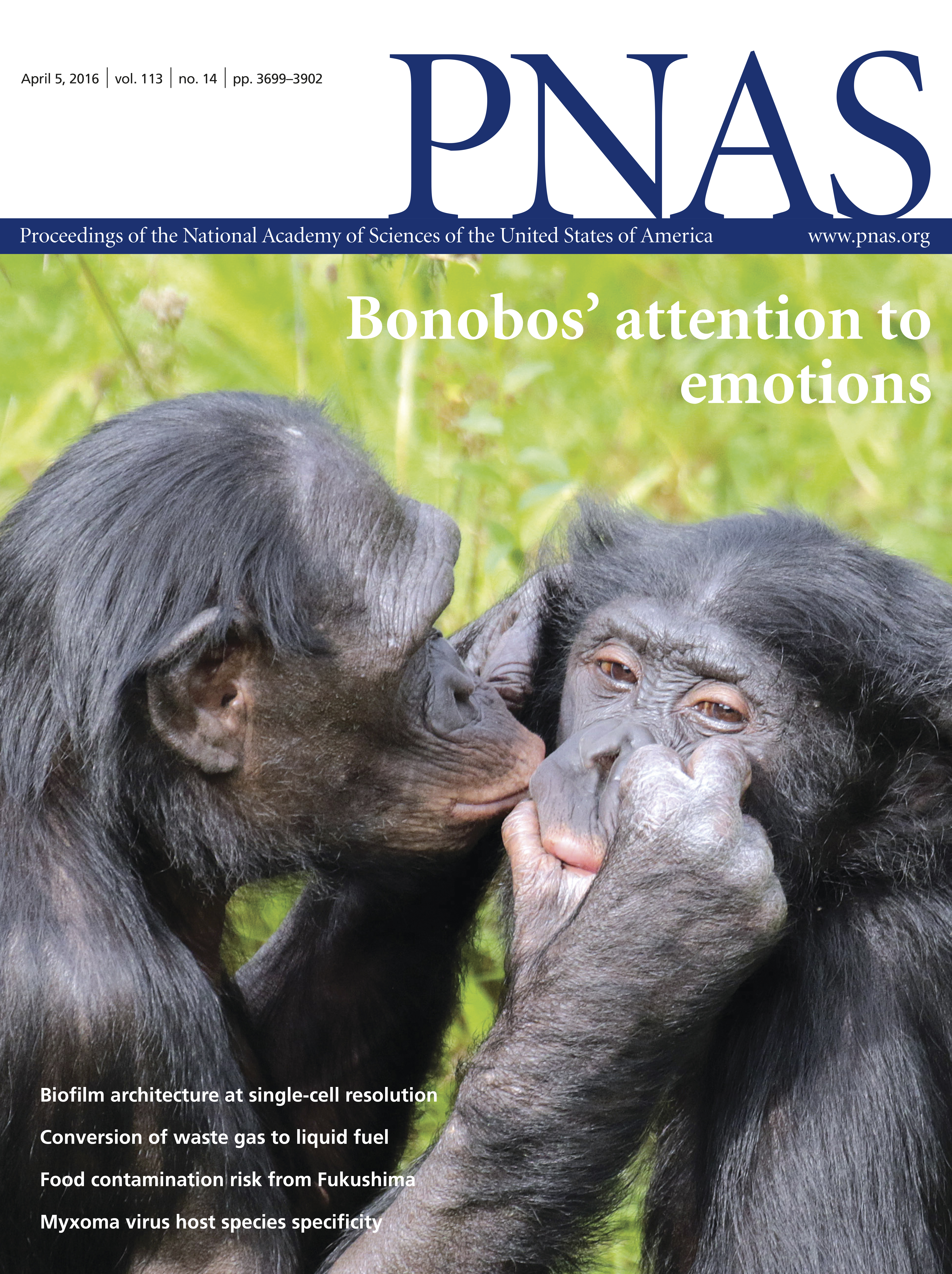 Our research on the cover of PNAS!

Bonobos – just like humans – give more attention to pictures that show other members of their species displaying emotional behaviour than to neutral scenes. Unlike humans, however, bonobos prefer to look at positive behaviours: social grooming, sex and yawning. This was discovered by the Leiden researcher Dr. Mariska Kret while conducting research at Apenheul Primate Park. Together with colleagues from the University of Amsterdam and Apenheul, she is publishing this finding in the journal Proceedings of the National Academy of Sciences (PNAS).

Closest relatives of humans
Bonobos, with chimpanzees, are the closest living relatives of humans. Research on their emotional behaviour can therefore also give insight into how emotions have developed in humans, says Kret. However, this type of research in bonobos is still quite rare.

Raisin as reward
In all of Europe and the United States there are only two hundred bonobos living in zoos, and Apenheul – with thirteen animals – is the only zoo in the Netherlands that has this species. Kret and her colleagues taught the skills required for the dot-probe test, a task that measures attention, to four females in this group. It involves the bonobo sitting in front of a touchscreen on which two images of other, unknown bonobos are presented on the left and right. The images depict positive, neutral or negative behaviour. Kret: ‘Each time, we simultaneously present one emotional behaviour and one neutral behaviour. Then a dot is presented in the location of one of the images, which the bonobo must touch in order to receive a reward: a piece of apple or a raisin. The idea is that she will touch the dot more quickly if it’s presented in the location of the behaviour that she’s just been looking at.’

Attention attracted by emotions
The test revealed that the bonobos’ attention is clearly more attracted by three different behaviours than by neutral behaviour: social grooming, sex and yawning. Kret: ‘The first two are socio-emotional behaviours, which are very important for the relationships between members of the group. Yawning is also an interesting feature. We know that if one bonobo yawns, another bonobo that sees this will often start to yawn too. We even know that she’s more likely to also start yawning if she has more empathy for the one that yawns first.’

Social cohesion
The tested female bonobos did not clearly give attention to negative images showing frightened and macho facial expressions, reports Kret. By contrast, humans who do the dot-probe test mainly give attention to negative behaviour, and this is probably also true for chimpanzees. Kret: ‘It seems that bonobos give most attention to behaviours that promote social cohesion. Bonobos are amazingly good at this: they avoid conflicts or resolve them immediately.’

Positive reinforcement
What is unique, says Kret, is that during the tests she and her colleagues did not isolate the bonobos from the rest of the group – Apenheul does not like to separate social animals. ‘It meant a lot of extra training time, in total at least three months. But just by using positive reinforcement, we were able to get them to voluntarily go and sit at the computer to do the tests.’

New tests
Kret and her colleagues have now started on a second round of tests, in which the animals are shown not only unknown bonobos but also images of ones that they know. Kret: ‘The bonobos were already there at the screen, they were really enthusiastic. We’re very curious to find out what effect the extra factor of known bonobos will have on the results.’