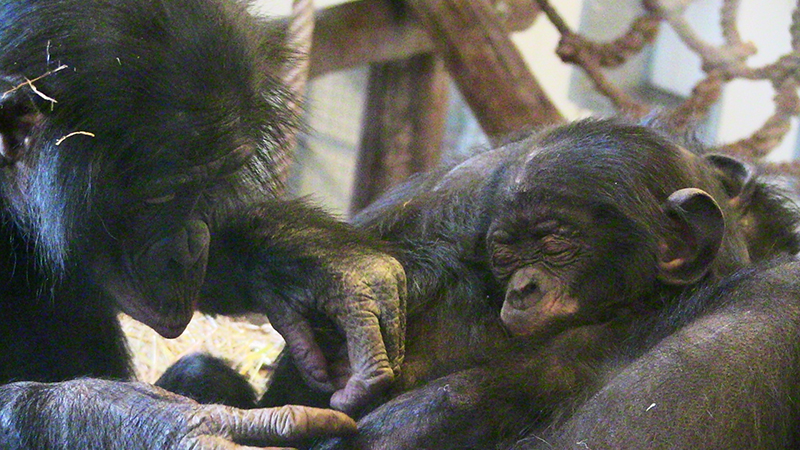 A glimpse into the emotional worlds of bonobos and orangutans

Our studies with the bonobos and orangutans are once again up and running! Last year, we started a follow-up study with the bonobos of Apenheul where we used eye tracking to study their sustained attention for emotional scenes of conspecifics. It was our first go at using this technique with the apes, and it took quite some effort to find the correct setup. Like any computer, eye trackers are very delicate (and not to mention: extremely expensive), so we had to design a box that protects all the equipment from curious apes. We succeeded in designing this box, but at a later stage in the study we found out that the plexiglass between the apes and the eye tracker was too severely scratched for the eye tracker to still work. Despite all of this, the bonobos did very well! We tested Kumbuka, Monyama and Besede, who also participated in the previous two studies. To everyone’s surprise, Zuani, the second highest ranking female in the group, also wanted to participate. In the past she became really excited when she saw bonobos on the screen, making it hard to have her concentrate on the task. In the current study she is doing very well! That goes for the other three bonobos as well. While we cannot say anything about the results yet, it is interesting to see that the bonobos are highly aware of their surroundings. The eye tracking technique allows us to view, in real time, where the bonobo is looking on the screen. While humans really fixate on specific objects on a screen (as we are very much used to looking at things on a screen), the bonobos’ viewing pattern is much more scattered. We find that very interesting!

At the end of 2016 we also started training the orangutans. Research assistant Daan Lameris has put a lot of time and effort into training the orangutans and they are almost ready to go on to the real task. In this study, we aim to find out what draws orangutans’ immediate attention. Are they, just like humans and bonobos, immediately drawn to emotional stimuli of conspecifics? Daan managed to train five individuals (Sandy, Samboja, Binti, Dayang and Kevin). The four women are almost ready to go to the next step. Kevin needs some more practice, but this is mainly because our equipment sometimes has a hard time registering Kevin’s touch. This is because he first leans on the screen with his big hand, and then uses his finger tip to rub over the correct spot. He is doing a great job! The screen can, however, not distinguish between his hand and his finger, so registration sometimes goes wrong. The biggest challenges in our studies are always the integration of the equipment into the living enclosures of the apes, making the setup as safe as possible while at the same time making sure everything works. Usually, the apes are doing very well, but equipment can be very sensitive, challenging us to make the right adaptations and train the apes in such a way that it all works. Daan is currently training Kevin some more. I am confident that with some more practice, Kevin can join in on the fun as well!