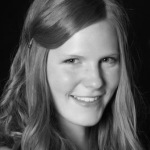 PhD student
2015 – present
Received a Bachelor degree in Psychology from the Rijksuniversiteit Groningen in 2012. Afterwards, she started her Master degree in Clinical Neuropsychology and one year later enrolled in the Research Master Program Behavioral and Social Sciences. She conducted her research project for the second Master’s thesis at the University of Cambridge and graduated summer 2015 in both Master degrees, the second with distinction.
My PhD project is about how we express our emotions and intentions, how we perceive these expressions, how we subsequently react to them and finally how we adjust our behavior accordingly. Previous studies have mainly focused on facial expressions or body language, lines of research that show that people are rather good at detecting and interpreting intentions from others and that people react to these expressions by mimicking them. A simple example is that when somebody laughs, you know that that person is likely to feel happy or be in a playful mood. Furthermore, there is an automatic tendency to laugh yourself or at least show some movements at the edges of your mouth, that is, mimic the expression of the other person. In my research project, I focus on these three aspects: the expression, perception and mimicry of expressions and how they affect social decision-making in the sender and receiver of such expressions. However, rather than looking at the above-mentioned expressions that are easily faked, I investigate more subtle signals, in particular, the pupil size, heart-rate, and skin conductance responses. They are known to be measures of arousal and also tend to be mimicked by another person in a close social interaction.
Previous studies and the first study of my PhD project have concentrated on one of these signals at a time providing us with valuable first insights into which responses tend to be mimicked and whether they have an effect on our behavior. However, when we interact with another person, we are not communicating with just the eyes, or just our heart. We use a choreography of signals conveying different pieces of information that as a whole communicate our intentions to others. One reason this has never been investigated before is the lack of advanced methodological methods. During my recent visit to Professor Steve Boker’s Human Dynamics lab at the University of Virginia, I developed methods to answer questions such as: how do these physiological responses interact with each other? Are some responses more mimicked than others and does that differentially affect (cooperative) behavior? To realize this project, I received the study-trip grant from the Leiden University Fund. You can read my report here.

Read more about my project in my blog.